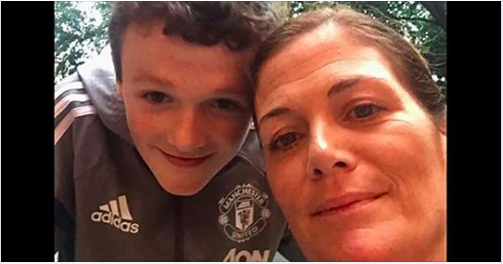 Teenager Liam had always loved soccer, hanging out with his friends, riding his bike and all the other things that a typical seventh grader enjoyed doing.

But, one day he gave his cell phone to his mom and told her he didn’t need it anymore. His mom was puzzled and just put it down to teenage hormones but slowly she watched her son lose interest in everything, even food, as he became a shadow of his former self.

Finally she decided something had to be wrong and begged her son to tell her.

Seriously! How handsome is my Liam! Future star!

Liam had always carried a soccer ball around wherever he went and was thrilled when he made the school team.

It was so heartbreaking for his mom Deirdre, who had four other children, to watch him lose interest in everything and get thinner and thinner, she told The Well. But she was determined to go to the bottom of it all.

She sat her son down and begged him to tell her what was wrong.

I want to send out a Thank You to the World for all the support for my son Liam! #weststandwithliamI know he will be back better than ever!

It turned out that for the last year Liam had been bullied by a group of so-called “friends” who had decided that he “sucked.” Her sweet son was forced to endure name calling, horrible language, pushes and kicks and even being told that he should kill himself every day.

The bullying had got so bad that Liam was suffering an eating disorder. They both cried at his desperate situation and even tried to confront the school about the issue but nothing was done.

Even when Liam came home with a bruised face, the school still wouldn’t investigate the matter. She felt helpless.

Liam had to be hospitalized and have a feeding tube, his eating disorder had got so bad, and nobody was doing anything to support her.

So his brave and strong mom decided to take matters into her own hands and share their story of social media. The response was huge! People from all over the world shared the post and commented with their own similar experiences of bullying.

Using the hash tag #WeStandWithLiam, thousands of people showed their support for Liam.

Liam underwent intense therapy for depression and an eating disorder. His treatment was grueling, but after 10 long weeks, Liam was finally stable enough to come home.
This very brave boy also did something amazing: He returned to school and joined the soccer team again and finished out the soccer season.

Deirdre and the family are hugely proud of their son who was brave enough to reveal his suffering, get through treatment and return to the school to face his cowardly bullies!

Unfortunately, Liam is not alone, there are too many children being bullied at school. And so many suffering in silence not getting the support they need and deserve. We must strive to hold these bullies accountable.

Share this article to show your support for brave Liam!