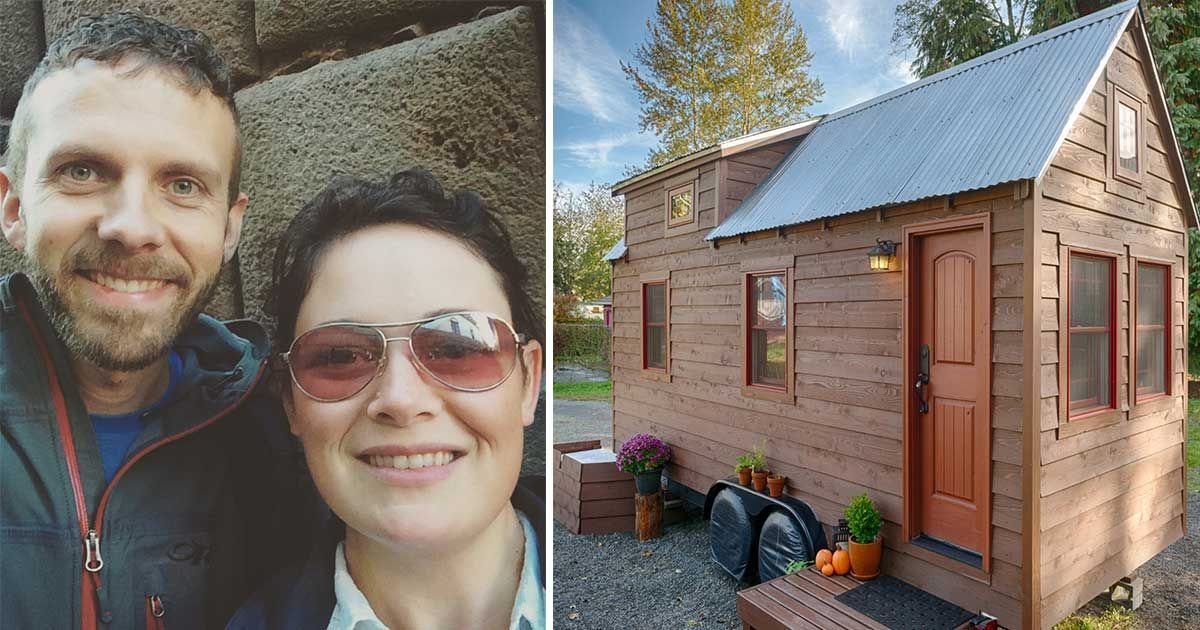 CHRIS TACK / CHRISANDMALISSA.COM
Like to see more from Interviews: Tiny Home Residents
Christopher, a photographer, and Malissa, a 3-D artist, designed and built their tiny house, the lovely Tick Tack House, in 2011. They spent 7 months in the process, coming up with a truly charming tiny dwelling. As they explain on their AirBnB listing, the Tacks enjoyed so much their lives in a tiny house, they’ve decided to rent it out for a limited time so others can “Try on Tiny” before committing to buy or build their own tiny house.
These are their thoughts on tiny living.
Can you describe yourself and how you came to live in a tiny home?
Christopher and myself would consider ourselves to be very conscious individuals. We try to live our lives with the kindest of thoughts and awareness to how we make each day. We both love to find ourselves out in nature, it’s where we find the most peace. And we love to seek alternatives for a better life. Going tiny was the natural progression for us and has allowed us to expand upon the things in our lives that have the most meaning. 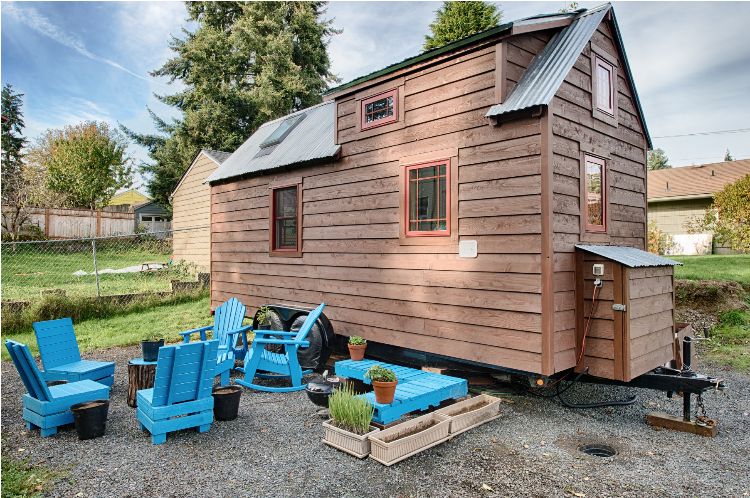 Like Interviews: Tiny Home Residents for more
CHRIS AND MALISSA
Why did you decide to downsize?
One of the biggest driving force for our downsizing was the ability to become mobile and have a place to call home. The tiny house gave us the ability to still travel if we wanted to, while keeping our own space. Not like jumping from apartment to apartment or buying and selling homes with all the hassles that come with it. We could have a home and take it with us, wherever we ended up.
What do you enjoy the most about tiny living?
Getting back to basics, saving money, traveling, spending more on experiences than stuff and the freedom of having more time to do the things we really want to do. The list goes on and on, but those are some of the major factors that we have enjoyed the most while living tiny.

CHRIS AND MALISSA
What were some of the difficulties or challenges you had to face when you decided to transition to a tiny home?
Transitioning to a tiny house wasn’t that extreme for us. Over the past few years, every move we made, whether from apartment to new apartment or from one state to the next, we found ourselves finding smaller and smaller spaces to call home. Over those years, we downsized each move and so the transition was pretty natural to us. But still, not to say that transitioning from a 700 sq ft apartment down to 140 sq ft doesn’t have its challenges. The building of our house took 7 months to complete, so in that timespan, we took it upon ourselves to downsize throughout the process. This way it wouldn’t be such a shock at the end.\
How did your family and friends react to your decision of going tiny?
I would say that 95% of our friends loved the idea and couldn’t wait to see it completed. One the opposite side, our parents could not begin to understand what we were talking about. They all figured we were moving into an RV. They were definitely nervous for us, but once they saw the completed house, they did not hesitate to brag about us to everyone they know.
Has tiny living introduced any major changes to your lifestyle?
The both of us have always been very aware of ourselves and surrounding and how the things we do affect everything else, but living tiny really opened our eyes to how we go about our daily lives and we began to notice a lot more. A perfect story, is that of water. Before going tiny, I would just flip the handle on the faucet and poof, water! 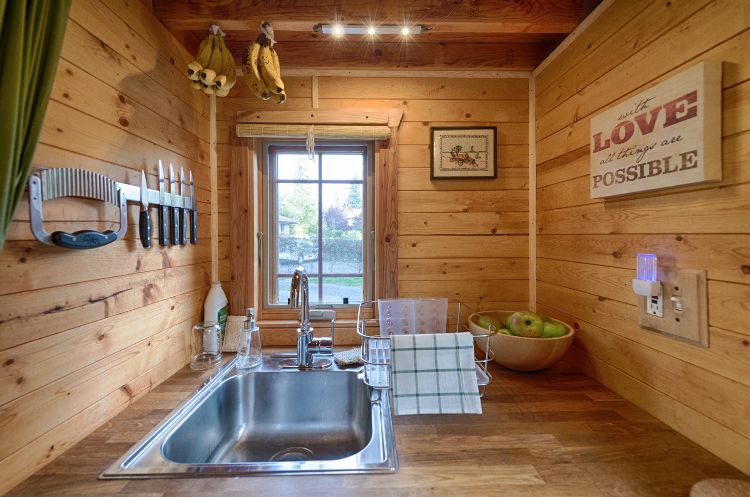 CHRIS AND MALISSA
I wasn’t responsible for where it came from or where it was going. Once living tiny, I know had to think about how much water my on storage tank could hold, how many days it could get me through, and where it was going once I was done with it. I became much more aware of my resources, and because of that, I began noticing how others treated water. While I was in a shared public restroom, I woman approached the sink to wash her hands, so she proceeded to turn the water on and reach for the soap dispenser.
While the water ran down the drain, she still had not yet placed her hands into the water to even wet them. She spent a good 20-30 seconds rubbing her soap covered hands together, as the steady stream of water disappeared down the drain. I was in the process of tying my shoe, when I noticed her, then found myself locked to her every movement. Once her hands were soapy enough, she moved them to the stream of water for those few seconds of rinsing. I couldn’t help but think about how much water must have disappeared down the drain, how many dishes I could have washed, how many teapots I could have filled, or showers I would have had. We find ourselves a lot more conscious of things like this now.
​ 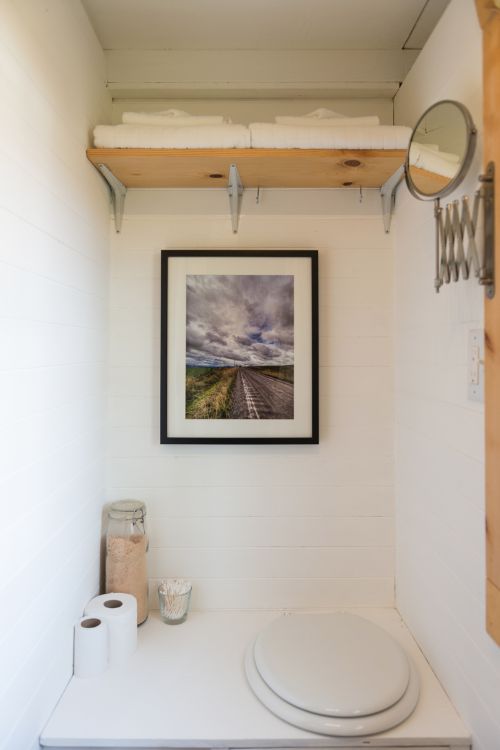 CHRIS AND MALISSA
Financially, would you say that living tiny has helped you?
Living tiny came at the perfect time for the two of us. Christopher found himself in-between work, and I worked as a freelance artist, so when there was work, I had work. If we weren’t living tiny, there is no way we would not be thousands of dollars in debt right now. Our average spending on utilities each year only equaled out to around $400. A year’s worth of rent roughly equaled out to that of two months in a one bedroom apartment in Seattle. So we were able to save some money, and visit friends and family more. We are able to support local businesses because we have the extra cash to do so, instead of putting into our home.
Is there anything that you’d have done differently in terms of design? Is there anything that you would include now or something you’d like to get rid of?
Designing the perfect tiny house is near impossible. There are pros and cons to just about every design choice that will be made but that isn’t the issue. The issues arise after dwelling in your tiny, only then do you see what you could have done differently, for that particular house, in order to make it work the best for the individual that is occupying it. That being said, my house isn’t perfect and yes, there are definitely things that I could change now after living in it. For instance, we did not include enough outlets in our tiny. Christopher, being a photographer, has a ton of gear and most that require batteries. Finding a spot to charge those batteries was one such challenge. It’s a small one, but it’s those things that make you stop and notice the design issues. 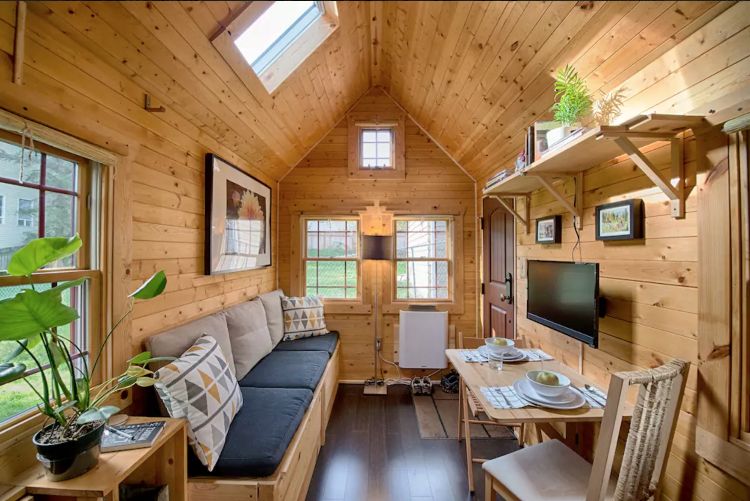 CHRIS AND MALISSA
On really hot summer days (we don’t get many in the Pacific Northwest) I kind of wish my skylight was one that opened instead of being a fixed one. Why I didn’t go with an opening skylight to begin with, you say? Everyone I had ever talked to about skylights mentioned they leak, so why would I take the added risk of having one that opens up. Seems like there would be a much greater chance of an operable one leaking than a fixed. There are pros and cons to every design, the trick is finding what will work for you and accepting that nothing is perfect.
What advice would you have for people who are thinking to move into a tiny home?
Tiny houses aren’t for everyone, but for those looking to make a change to a more simple way of life that has less stress and more freedom, I would just say, do it! It was one of the best decisions I had ever made, and opened up a whole new chapter in my life, full of adventure, trials and achievements! Even if you fall on your rump, at least you’ll have a great story to tell.
Do you have any tips for anyone wanting to incorporate the “tiny way of life” even if they’re still living in an apartment or a larger house?
Just to be more conscious of things around you. Turn on lights if you are in a room and off when you are not. Find more efficient ways to heat and cool your space, there are tons on the market theses days. Try changing your low efficient lightbulbs to LED lights instead and recycle as much as you can! Everything helps! 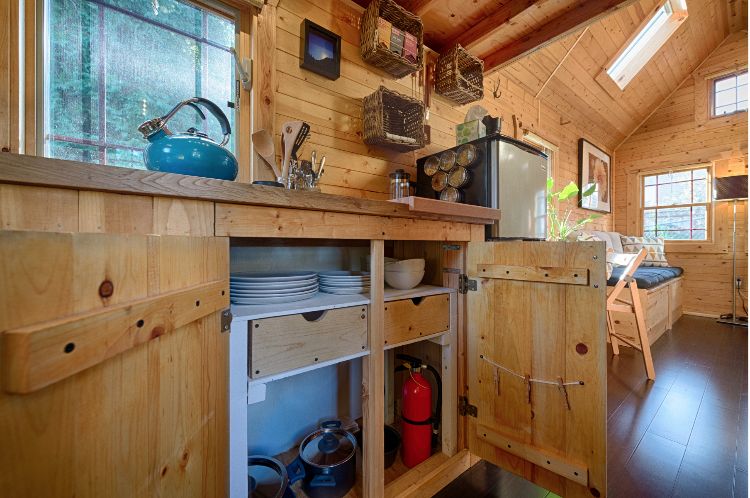 CHRIS AND MALISSA
What have you done yourself and what was done by professionals? Do you have any recommendations in this regard?
Christopher and myself worked on our home for 7 months back in 2011. Christopher’s parents flew out to visit and we had them help us rough in the wire for the electrical and install the roof beams and roofing materials. Our landlord at the time oversaw the completion of the electrical and our very simple plumbing job. All in all, I would say that Christopher and myself did 98% of the work ourselves, with the help of only family and friends. We did the work ourselves, which saved us thousands of dollars on the end cost of the house.
On average, over the course of those 7 months, we spent just over 800 hours of physical work on the house and roughly two weeks out of each month was spent doing research on the next steps that needed to be done. Mind you, Christopher and myself had no prior construction experience, it was a learn-as-you-go process for us. We didn’t build the house all at once, we built segments of the house at a time and the end result was a completed home. We also had the luxury of time on our side. Because I treated the build as if it was my full-time job, we were able to allocate the time needed to get it done in the timespan we had. I’ve seen tiny houses built in a matter of weeks whereas some take years, just depends on the individual, time and money. But whether you build it yourself or have a professional do it, as long as you’re happy with the end result, I see no wrong way of doing it. 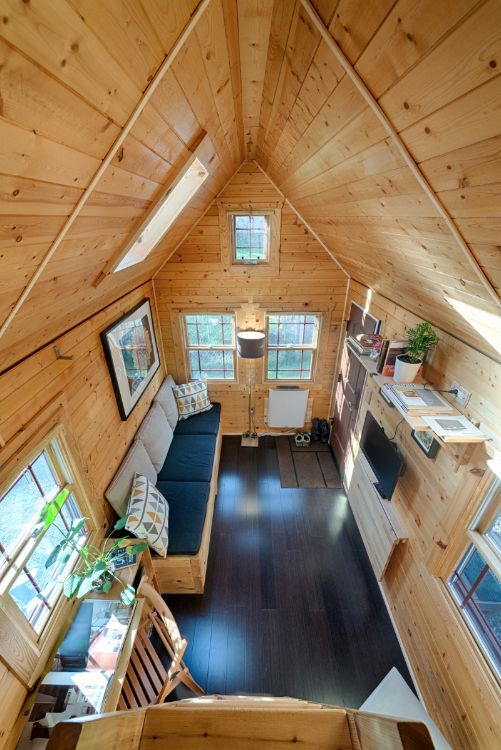 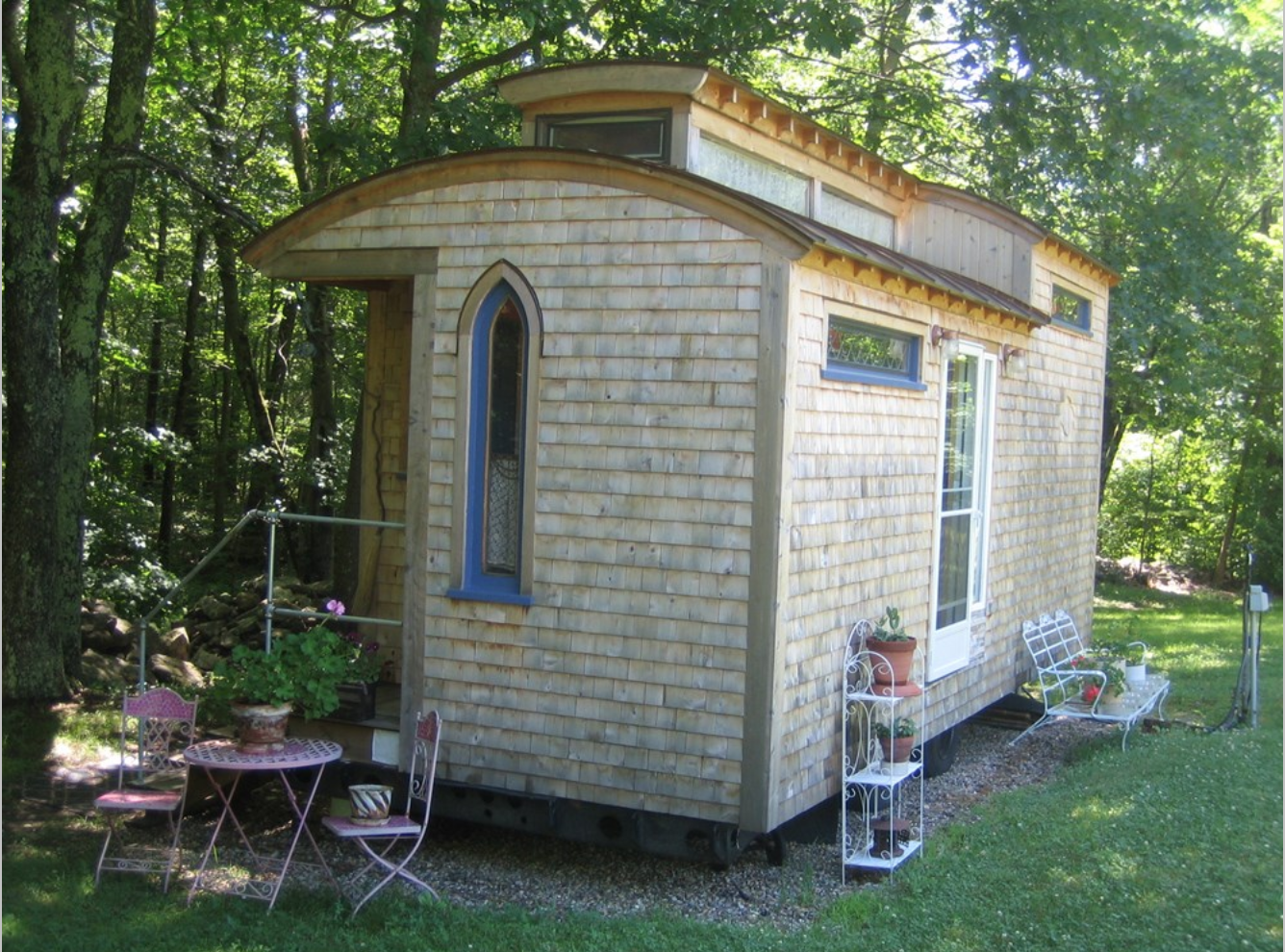 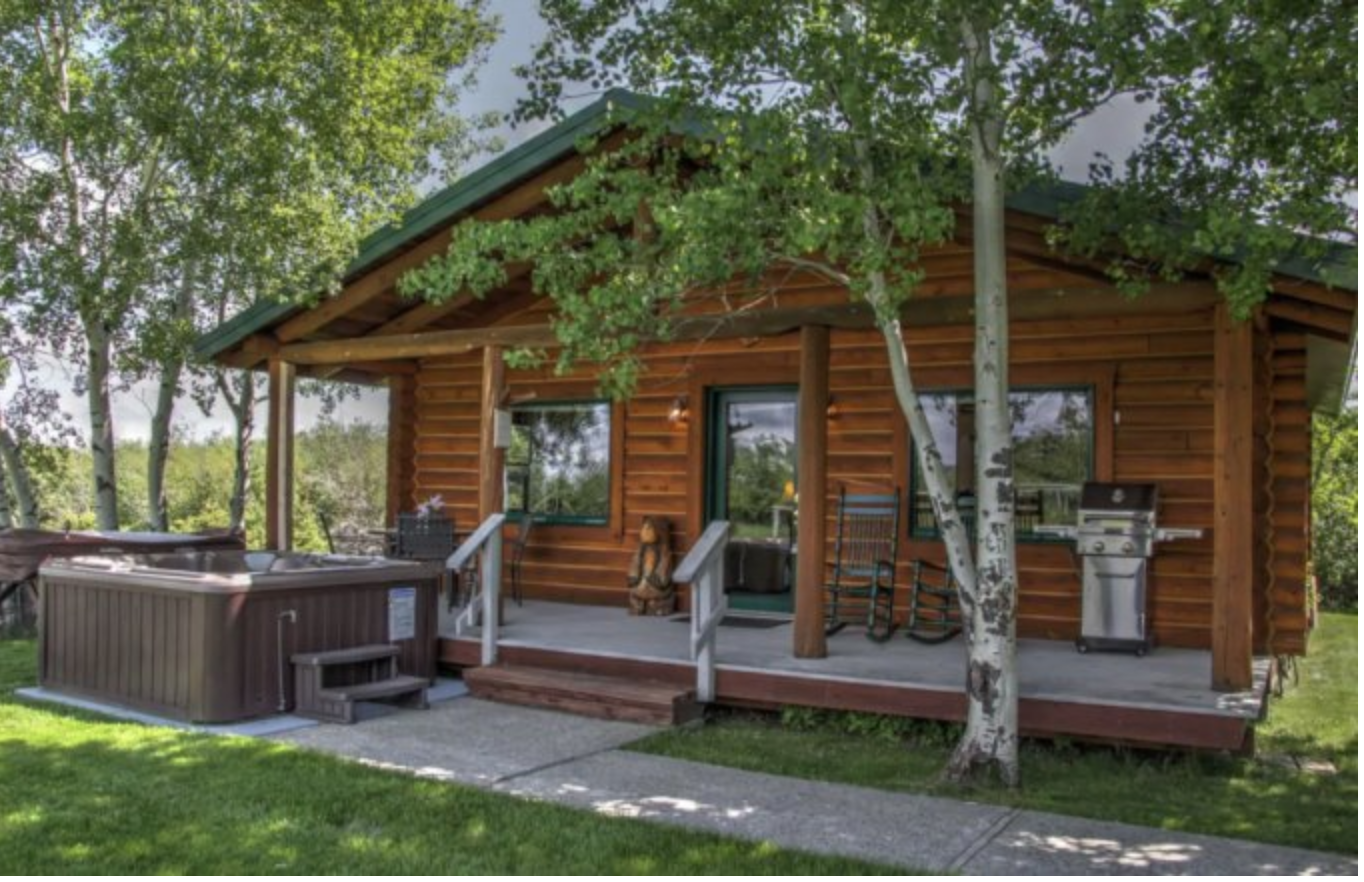 This cozy log cabin is called the Two Willow Cabin …